Members of the White Oak Pastures team had the opportunity to attend the Memphis in May World Championship Barbeque Cooking Contest. Brian Sapp (Director of Operations) and Ban Stewart (Quality Control Manager) assisted in cooking two of our Heritage Breed Hogs with BBQ Hall of Famer, Myron Mixon. Myron, who hails from Unadilla, GA, is the winningest man in Bar-B-Que, a successful cookbook writer and widely popular TV personality on several cooking shows and competitions. His team’s official name is, Jack’s Old South and together they have won more competitions than any other team in the world. 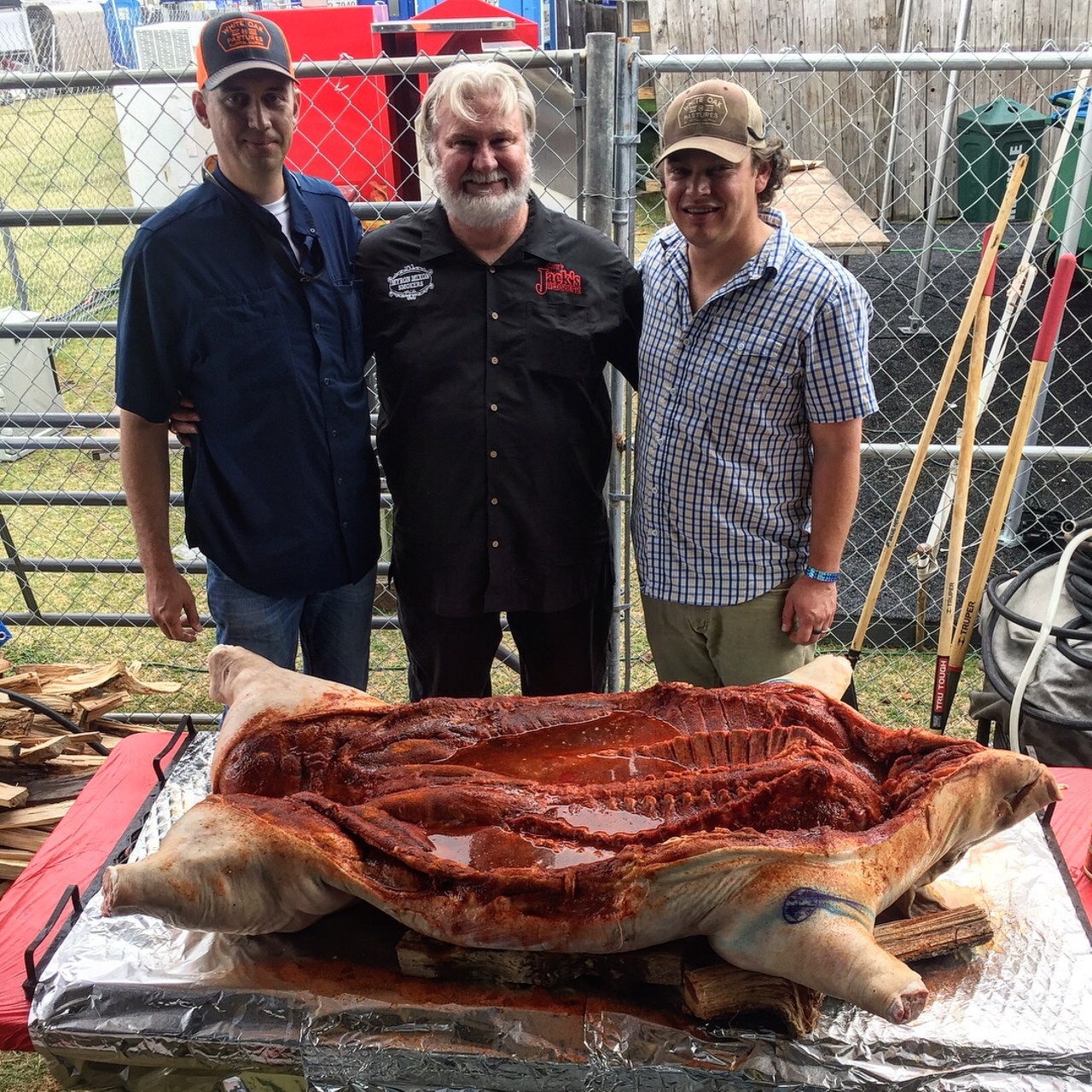 We became excited when Myron contacted us to acquire our pasture raised hogs in hopes to win his Fifth Whole Hog World Championship. This was truly a team effort, as our managers and field staff ventured into the pastures and picked out two beautiful Berkshire hogs for the Champ. On Tuesday, May 15th, Myron and his brother, Tracy, visited our farm to pick up our hogs. The Mixon Brothers received a tour around the farm and the abattoirs; afterwards we were entertained by Myron’s stories and anecdotes while eating lunch at our Pavilion Restaurant. 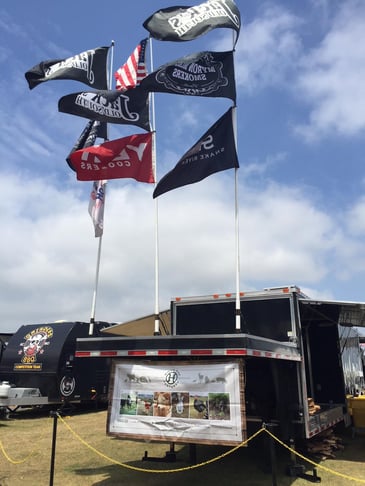 Memphis in May encompasses several events throughout the month which include: Beale Street Music Festival, The World Championship BBQ Cooking Contest, Great American River Run and 901 Fest. Tom Lee Park in Downtown Memphis hosts these events on the East bank of the Mississippi River. This year’s attendance for the BBQ Championship reached over 150,000 people from not just the Southeast but all over the world.

Friday morning the team arrived to the event grounds at 6am in preparation for the next two days of cooking after Thursday rain showers in Memphis, TN prevented the team from setting up the fifty foot cooking trailer.  The hogs were placed on tables to warm up under the hot Memphis sun. Hogs were cut, trimmed, injected, rubbed, and wrapped all under Myron Mixon’s orchestration. Secret sauces and pork rubs were used to honor our pastured hogs. At noon the two large water smokers, which Mixon designed, were lit with red oak and peach wood. The prepared hogs were strategically placed in the cookers an hour later. Jack’s Old South Team members tended the fires all day and all night.

Saturday morning all team members arrived as the sun crested the horizon allowing the Mighty Mississippi River to shine. Cooks, judges and volunteers shuffled around the event grounds as the scent of oak, hickory and fruit wood bellowed out of smokers large and small. Intensity grew in anticipation for judging to begin. All the human senses came into play with last minute checks of temperature, taste and presentation. A box of pork filled with different portions of the perfectly prepared hog was delivered to the judging tent. On site judges appeared to the trailer to inspect the beauty of the wonderfully smoked hog. As the last judge left the cook site the team paced around as friends and past team members made their way in and out. Myron exclaimed to his team, that this was better than the hog they won with in the 2016 World Championship win.

The news came by way of an official of the event; we did not make the finals. Our only hopes now were to place in the top ten. Myron and team gathered around the Main Stage with expectations of hearing their name announced to walk across the stage. Unfortunately, their name was never called. Official results revealed that Jack’s Old South placed 14th out of 37 teams. Arms were embraced in hugs, words of encouragement were spoken and plans for next year began to be laid out.

We know that Myron and the Jack’s Old South Competition team justified our efforts even without a win. It was such a pleasure to take part of this prestigious event with fellow Georgians who take pride in our Great State. We gained an unwavering bond with the BBQ Hall of Famer and his World Class Team. Next year we will be back in Memphis and stand beside our new friends to bring the BBQ World Championship trophy back to Georgia.