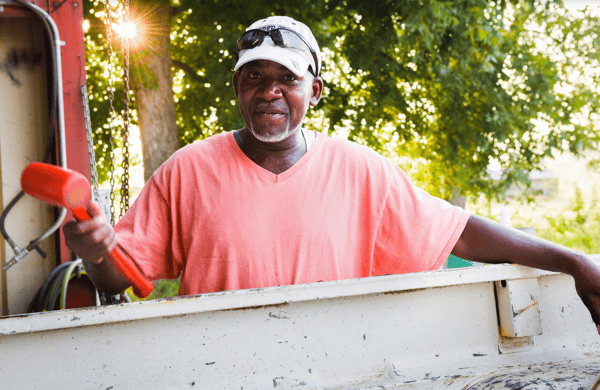 Meet the two men who worked hard to give your holiday turkeys the best possible life on pasture. James Barbary and Trevor Cates are the field crew members who are primarily responsible for caring for our turkey flocks. James Barbary has worked at White Oak Pastures for over two years and two holiday turkey seasons. He brings his positive attitude and care for the birds to work every day, and we are so grateful that he has joined our turkey team.

“Before I came to White Oak, I was working at the chicken plant at Baker Hill, Alabama doing sanitation work. I’m originally from Colman GA, my daddy is originally from Bluffton. I moved back here about four years ago.  I wanted to be closer to my family and I met a girl and got married. We moved into the family home. And I’ve been here ever since. 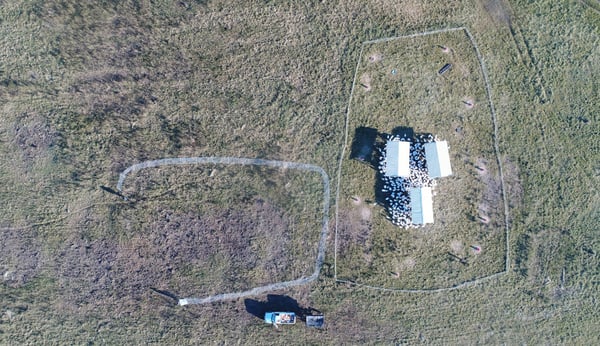 I started off as maintenance in the field with the chickens and the ducks. I was fixing the waterers and feeders. I was working in the mechanic shop also. I then worked pressure washing and cleaning the chicken houses and brooders. Then I started on the moving crew moving the poultry houses.

When the main turkey man left, he asked me if I wanted to take over the turkeys. I said “Sure, I’ll give it a try”. So since September 2016, I’ve been with the turkeys. The turkeys have improved every year. I had to learn a lot about the turkeys’ behavior, how they eat. I caught on quick. The turkeys learned me and I learned them. So I’ve been raising them for the last two seasons. I like raising turkeys. If you start raising them as bitty chicks, they get to know you, they learn your scent. You learn their habits, their behavior. You watch them grow, you see the changes in them as they get bigger. We want to keep the water fresh and we also put apple cider vinegar in the water. It’s good for the turkeys. As they get bigger, their eating habits change. We watch them and adjust our feeding schedule based on their behavior. When they get to 10-12 weeks of age, we switch feeding from one to two times a day. 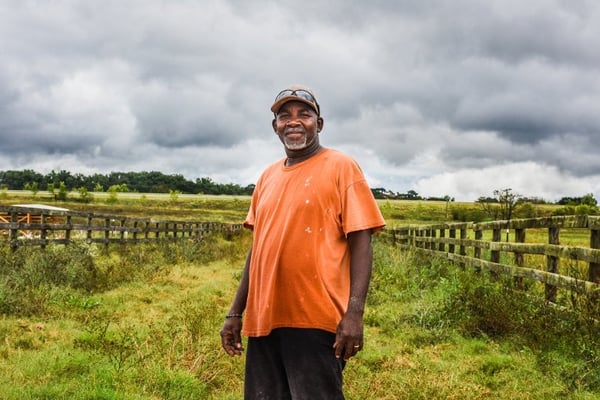 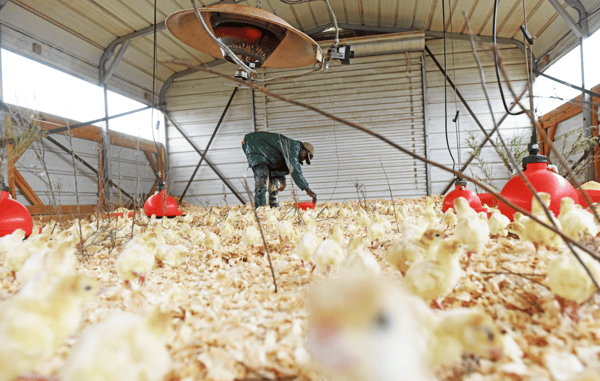 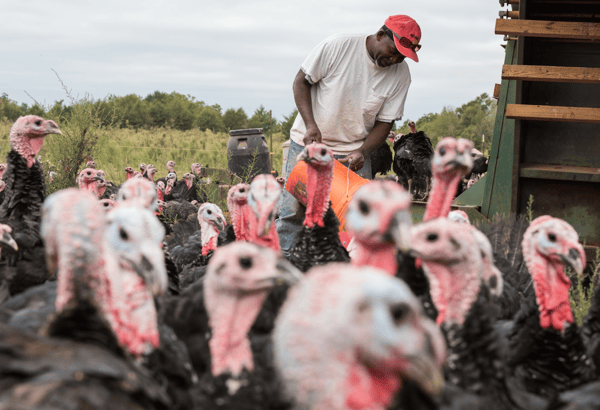 Trevor Cates joined our pastured turkey team six months ago. We originally met Trevor through Savory Institute, where his father, Tre Cates, is C.O.O. We are so delighted to have welcomed Trevor onto our farm.

Trevor lived in Boulder, CO most of his life but spent the past several years farming in various production systems around the world.

“Kenya was pretty amazing. I was living in the wild in a tent. I was working on a farm conservatory. They had a butchery where I learned to slaughter and butcher meat. I also worked in the shop and they taught me how to weld. That was hard because of the language barrier. They also had a broken mask and you had to hold it while you welded. I did everything. I was moving cattle and goats. I was building metal fences to separate the cattle. It was really cool and a lot of fun with good food. You learn how to improvise down there, for sure. I miss the animals. Everyday after work, I’d just go drive in my truck and see hippos, zebras, and lions. 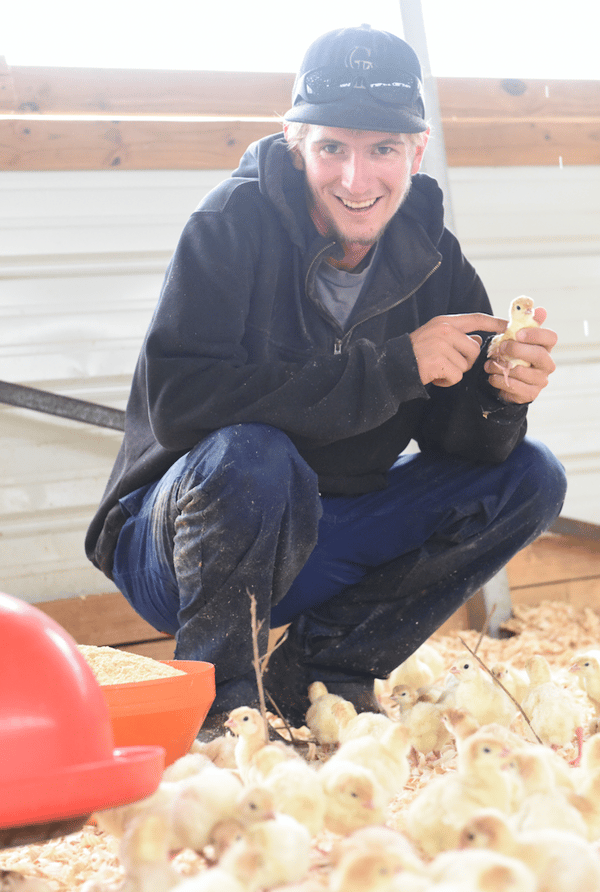 I worked on another farm in New Zealand. New Zealand was my favorite.  I grazed cattle and had two of my own cattle herds, 400 head each.

After that, I went to Koyikee, Chile and worked in the mountains herding sheep. I was also picking and delivering vegetables to restaurants.

I found out about White Oak Pastures through my dad. My dad mentioned my background to Mr. Will and Mr. Will offered for me to come check out the farm. So I did, I liked it, and I came out here and started working. 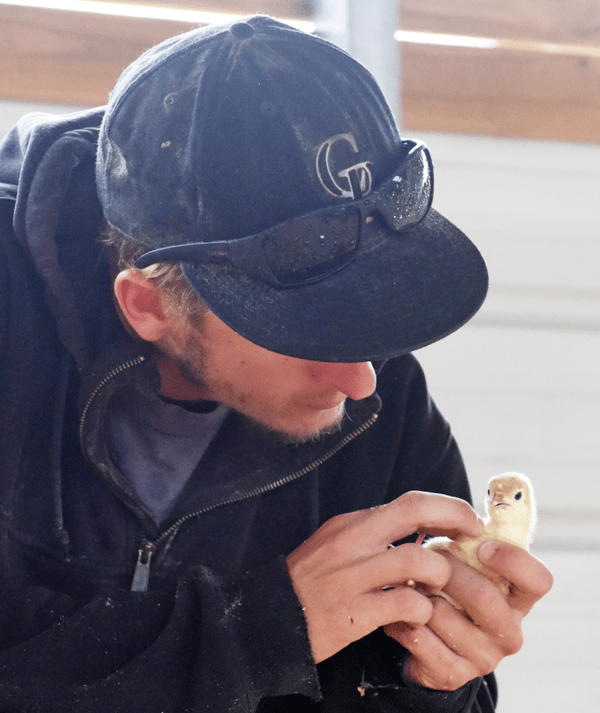 Turkeys are great. They’re funny and really easy to handle. If you go out in the evening, and it’s not hot, our monthly birds, the white ones, just like to chill. But our holiday birds, the darker ones, go everywhere. When it gets nice and cool, they just start walking around.

We have 6,200 holiday turkeys. Our oldest sets of turkeys have grown to be just massive. With all the feathers, I’d say they weigh 25 lbs right now. Their feathers are shiny, in a rainbow kind of way. It’s really cool.

The most satisfying part of his job:

Getting to eat the turkeys. Seeing how we did at the end of the day, especially seeing how big they get.

That’s all that matters. Our jobs are simple, but it’s a lot of five-gallon buckets to feed them. We always brag about it, too. Like, when we see people walking out of the Pavilion, we ask, ‘Did you like those turkeys? See how good they are? Those are our babies. We raised them”. It doesn’t bother me to eat the turkeys. They peck you sometimes and you can feel it through your pants and you’re like “Gosh, I can’t wait to eat you guys.” 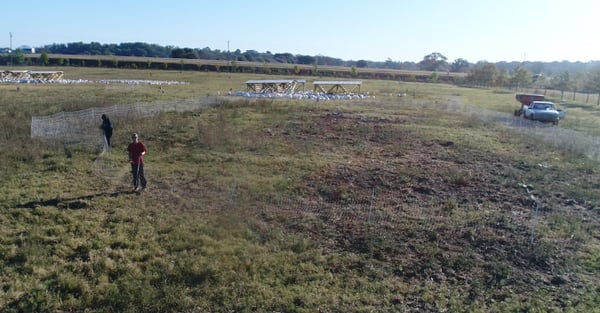 I guess getting the turkeys to 25 lbs. If I see a turkey that looks sick, I say, ‘Come on, buddy, let’s go, eat the feed’. I’m always rooting for them.

What is your favorite food at the Dining Pavilion?

The oxtail was really good. It was like meat soup. It was amazing.

What White Oak Pastures products do you like to cook with?

Duck sausage. I break up the sausage and put it in pasta. 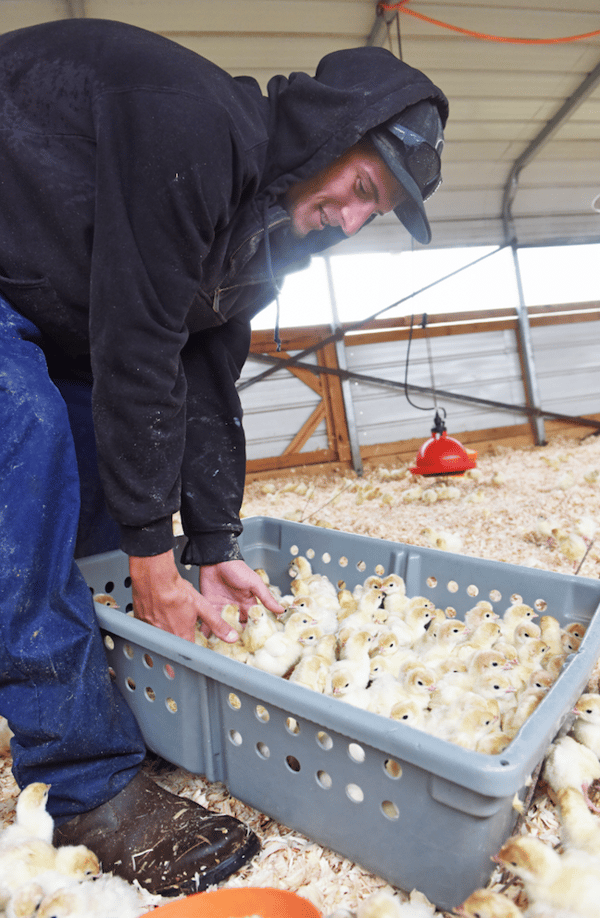 If you could choose to switch places with someone on the farm for a day, who would it be?

I guess somebody in the hog crew. I’d like to go work with the hogs and see how that works. Every time I see the hogs, they look so friendly. The crew always tells me, “Oh, no, they just look friendly. They’ll get you. You better watch yourself.” It looks like good, hard work and they do a lot when I see them. Yeah, that’d be cool to check them out.

What hobbies do you have outside of work?

I go fishing, take walks, spy on eagles, drive around when the sun sets. We have baby goats at home. I like basketball, skiing and snowboarding. 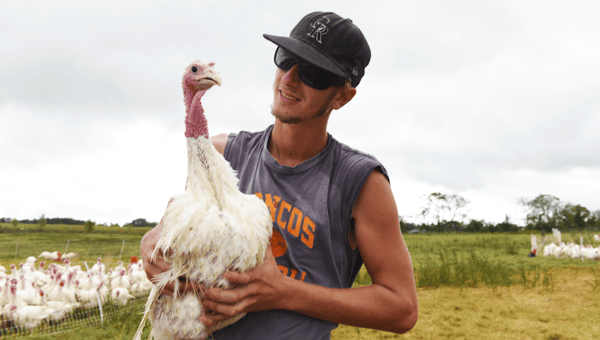