Our Red Meat Processing Plant has the capacity to process 36 cows a day. We depend heavily on our skilled butchers who work in the Cutting Room. There are different jobs in the Cutting Room, from Breaker to Boxer. Nick Often may be the smallest person in the room, but he has an amazing work ethic and energetic spirit, and this gives him the drive to be one of our three Breakers in the Cutting Room. Nick feels his Cutting Room coworkers are like family. He explains, “In the morning, you can tell when everyone comes in, if they’re feeling good. We've been around each other so long we can tell”. Nick believes the farm has afforded him an exciting, dynamic way of life which has boosted his self esteem. “I’m one of the only people who has worked in all three areas- the field, the Poultry Plant and the Red Meat Plant. It’s really exciting to come from being nobody to being somebody up here. I get to show my skill. It motivates me”.

How did you get into the field of work you are in now?

I’ve been here for a while, six years. I love it. I started at White Oak Pastures because my cousin was working out here. I started in the field on the poultry crew helping move the chickens. This was before the Poultry Plant was even started.  Then they took me out of the field to work in the Poultry Plant because I had a lot of my past work experience.  I used to work at a Perdue chicken plant in Alabama for about 8 years. In the White Oak Pastures Poultry Plant, they had me doing everything, even boxing, I was able to wrap real fast. I helped keep it running. Doing the paperwork and showing the staff how to debone and cut chickens. I was one of the first to train people. The poultry field crew would come up to me and ask me how many birds they should bring in that day, and I would tell them.  I was good. They didn’t want me to leave for the Red Meat Plant.  But, I’ve been in the Cutting Room for four years. It’s very challenging too- if you don’t know what you’re doing you’ll be lost. It’s a work out. It keeps me active. 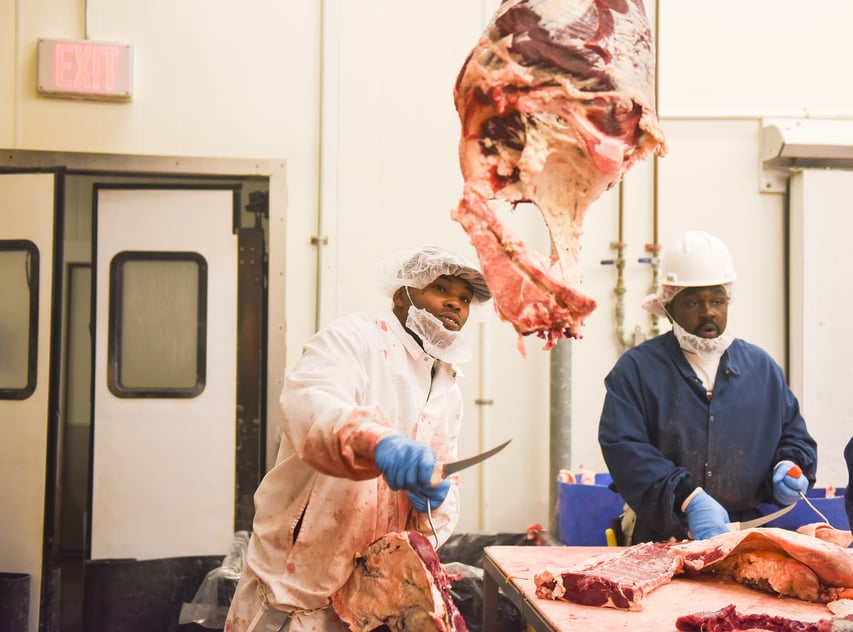 Can you explain your Breaking Role?

I bring the cow halves out of the cooler and spray them with a peracetic acid which is our antimicrobial intervention to cut down on any pathogens on the beef carcasses. It’s real neat because, I would’ve never thought that the inside of a cow looks like it looks. It’s a pairing that you have to follow when you’re dealing with the carcassess, when you break it in half, you see the pairs. Then I cut the bottom half off and put it on the bandsaw, run it through. Then, I take the hip off and take the bottom rind and sirloin off and then you got nothing but the leg and knuckle and you take those off.  I put all the pieces on the table for the rest of the table to work with. I do circle around the table- your body needs to rest a few days after breaking. Sometimes I might be boning, sometimes trimming, but breaking is the hardest part. It’s good though because you’re moving, you’re not standing in one spot, that’s the best thing about it. You got to keep a sharp knife.

What is the most satisfying part of your job?

When I know I’ve done a good job. That makes me really happy. When you do a good job, you know it. Like about a week ago I had done 27 cows before 11:30AM. That ain’t no easy task. That’s a lot of cows. That’s why they like me to break because I don’t play. Everybody else goes so damn slow.

What is the biggest challenge you face on at your job?

Can you imagine me, a little guy, breaking down these big cows? That’s why they’re all shocked. Mr. Will was shocked when he first saw me, he was like “you’re so little”. They don’t know I work out. When I first started they were all like, “He can’t do that, he’s too little, he can’t do those big cows”. You gotta show them, it ain’t about the size, you see. You gotta be dedicated to do that. If you ain’t got no dedication, it don’t matter. That’s what made me go harder because I’m the smaller one and they thought I couldn’t do it, so that just boosted my ego .

You have to  always stay ahead of the rest of the room. They’re waiting on you. I’m used to it, it’s like a flow now- once you get used to it, it comes easy. It’s something to see when you walk into the Cutting Room.  It’s not like the other rooms, it’s a whole other level. You got to work fast, you can’t go slow in that room.

What has been your proudest moment since working here?

When the boss man, Mr. Will, tells me I done a good job. Mr. Will is a good guy.

What is your favorite food in the dining Pavilion?

If you could trade roles with someone on the farm for a day, who would it be and why?

That’s a hard question. I’d say the hogs - I see them all the time out in the woods- they’re really exciting to me for some reason. I really don’t know that much about hogs, but I know how to cut them real good. It just comes natural. That’s why they brought me to train to cut the Iberian Hogs.

Exciting. It’s about one of the best places I ever came to. You see some exciting stuff out here. I live in Bluffton, but I am from Early County. My step mom knows Mr. Will, they were in school together.

What’s the best, and worst, part of living in this part of GA?

I like it- this part of Georgia is the country. It’s not that rough, it’s right friendly down this way.  Not really anything bad about living around here, it’s quiet, not too much traffic. The best thing is I stay about four minutes away from the farm.

What is your favorite meal to cook at home with White Oak Pastures products?

I buy the ground chicken and cook it with white rice. You need to know how to season it. When I started cooking it at home, everyone started liking it so I had to start buying it all the time. 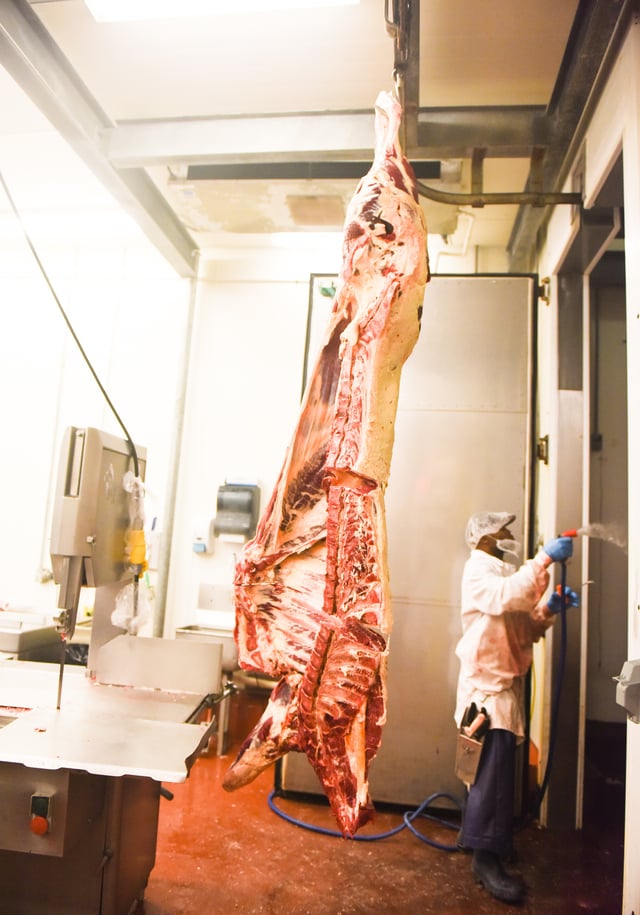 Cleaning up to make the work area safe- it gets dangerous in there if it’s dirty- you can slip and fall if it’s messy.

What’s your favorite hobby outside of work? 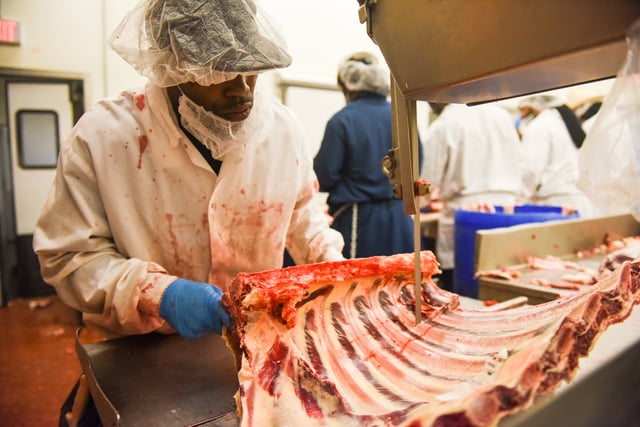 Here on the farm, we talk about butchering as an art. Can you speak on that?

To be a butcher you need experience. You gotta know what you’re doing to be a butcher. It’s dangerous, you could hurt yourself, you could mess up the meat. At my last job at Purdue Farm, I was Certified in Poultry Butchering. For the certification, you need to have speed- I could cut two birds in one minute.

In butchering, if you don’t know what you’re doing or if you get scared you’re gonna mess up. A lot of people come out here and say, “Oh, I can do that”. But when they get here, they get lost, they get scared, nervous.

When I first came on and came into that room, I said, “What in the world did I get myself into? But then I learned. There’s a certain way you gotta cut the meat, with speed, and not mess it up. Some people say they can’t do it.

We train the new guys on the trim cows. If you don’t know what you're doing you'll cut your finger off. Everything here is exciting. For somebody who’s seen it for the first time, it’s very impressive. At both plants, you got to know how to use a knife. The tighter you hold the knife, the more it’s going to hurt later. I need to take care of myself, exercise my hands and sometimes put them in hot water- your hand will swell up with all that pulling and flexing and using the bone saw if you don’t.

You gotta be dedicated. I’ve seen a lot of people come and they don’t stay a couple hours - they say, “y’all work too fast and too hard”. 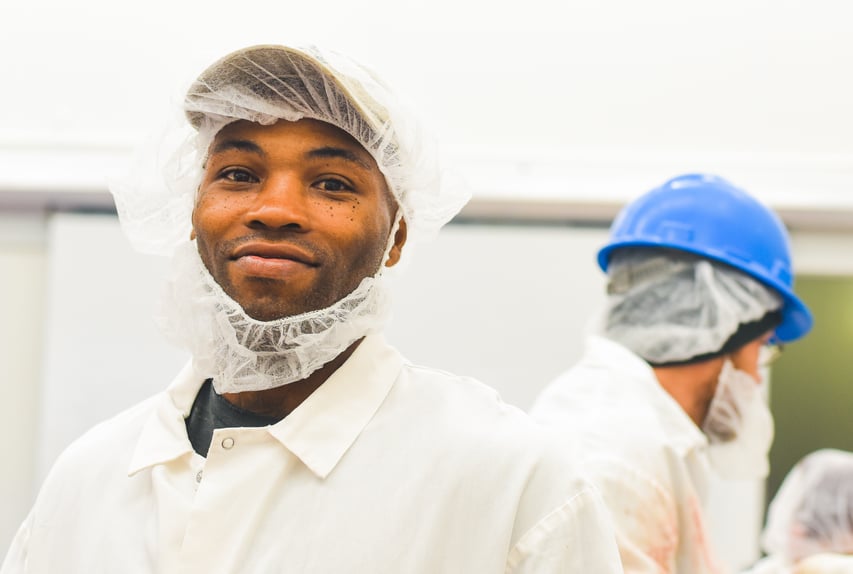