The Story Behind Our Village Loyalty Program

COVID-19 and the events in the spring caused scarcity in the commodity food system, which overwhelmed our on-farm production and fulfillment center. After we were able to restock our inventory, we took some time to carefully evaluate how our farm responded to the overwhelming demand. In response, in order to best serve our loyal customers, White Oak Pastures launched the Village Loyalty Program.

The Village Loyalty program identifies and rewards the customers who consistently support our farm over time. For our longtime customers, this is our way of showing our appreciation for your continued support. For our newer customers, we hope this gives you another reason to stick around.

In addition to supporting a production system that is good to the animals, good to the land, and good to the community, our Village Members also get exclusive perks, like early access to sales and product launches, priority order fulfillment during busy times, early access to our new weekly video series, and more. You can see the full details here.

We depend on our customers every month, every quarter, and every year to buy the food we produce, so that we can tend to this land, these animals, and this Village. We have put everything that we can in place so that our customers can depend on getting our meat, poultry, eggs, leather crafts, and other zero-waste goods anytime they want.

To give perspective on what the Village Loyalty Program means to our farm, Will Harris, the owner of White Oak Pastures, and Kathryn Crockett, the artist behind the beautiful Village of Bluffton designs and emblems, share what the saying “It takes a village” means to them. 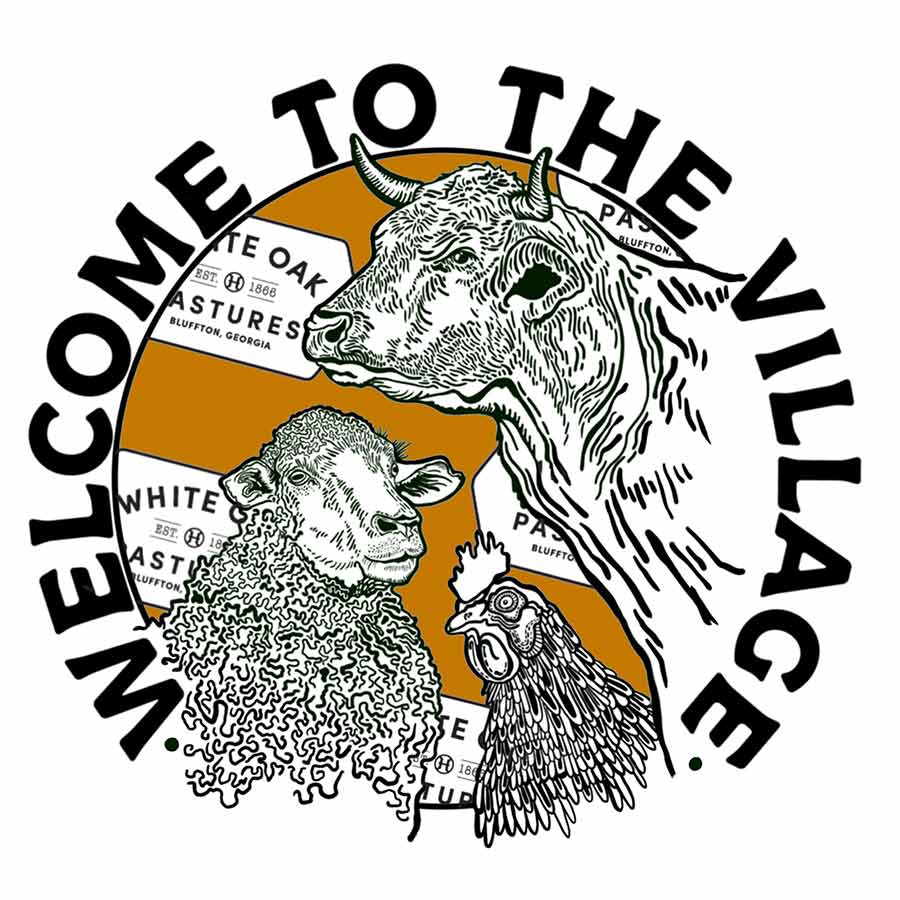 I graduated from the University of Georgia's College of Agriculture in 1976. My degree was in animal science, and I thought that that was a great way to make a living. I loved it. It was what I wanted to do.

At the time, my father was running our farm as a very industrial monoculture of [only] cattle. It was what is now often called a “factory farm”. For the 20 years after I graduated, first my father, and then I, operated White Oak Pastures as an industrial, centralized, commodity farm.

So... I began changing things. After the changes took effect, I liked what I was seeing a lot better. I chose to make very intentional, and dramatic changes to the way that I managed the land and livestock.

I did not intentionally change our farm's relationship with Bluffton, our village. But... the impact these changes had on the town were as significant as the improvements that I saw with the land and animals.

Industrial, commodity, centralized farming had rendered our town economically irrelevant. A community that had been prosperous for almost a century and a half became impoverished in less than half that amount of time. The town simply was not needed any more. And, sadly, this happened to thousands of farm communities all over America.

But – we figured it out by accident. The new kinder and gentler farm production model caused the town to be economically relevant again. Bringing in a hundred educated, energetic, and passionate people to work on our farm changed the entire dynamic. These people needed a place to shop, eat, drink, play, and sleep. The town evolved from a ghost town to a thriving little community.

It was a literal rural revival. And it only took a decade to do it.

We celebrate this miraculous economic accomplishment by shaping our customer loyalty program after it. We find the old African proverb "It takes a village to raise a child" to be an undeniable truth [no, Hillary Clinton did not come up with that saying]. We learned the hard way that it takes a village to alter a broken food production system.

COVID-19 demonstrated that we were right on our first two efforts, and dead wrong on the last one.

For this reason, we re-thought how we were being loyal to the folks that are loyal to us. And with this Village Loyalty Program, we’ve taken steps to fix it. And we like it a lot better.

We invite you to become a citizen of our village. 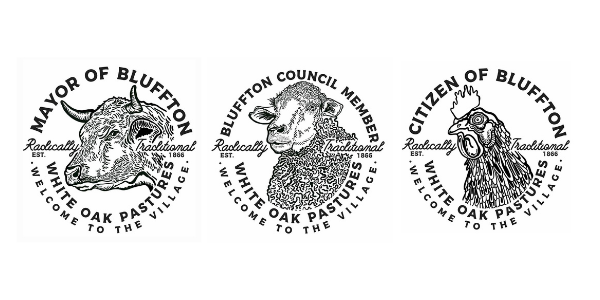 I’d never heard the term “Rural Revival” until I first met Will Harris, but it’s actually an idea that has defined me since a young age. I’m an artist and photographer, but here in Bluffton, typically I am described as someone “with an accent” (which I should add is particularly entertaining when it comes from a Southerner). I'm as far from Southern as someone can be, but Bluffton has felt familiar to me from day one.

I am a Welsh transplant here in the rural South. It may come as a surprise to some, but I find a great many similarities between the small towns of South Georgia and the quiet villages of South Wales. The comparisons are especially strong in terms of ecological vibrance and, sadly, economic disadvantage.

Both my paternal and maternal grandfathers worked in the coal industry. But by the time I was two years old, the privatization of the coal mines had decimated an already-fragile industry. Coal had been trying to evolve to absorb the impacts of cheaper exports, declining subsidies, and a rapidly-changing energy culture. The changes devastated our communities, and to this day, Wales remains one of the poorest countries in Europe.

Mining had always created many health problems for the communities that sustained it (my own grandfather died at an early age from the effects of being a life-long miner). But while both my grandfathers are gone now, the economic void left by mine closures lives on in South Wales.

These communities were never financially “wealthy”, but at one point they were greatly prosperous in terms of cohesion. However, financial instability, job scarcity, and eventually the absence of community cohesion took an equally devastating toll on local health and happiness. While these communities are always striving for economic recovery, the regeneration of community spirit is a far more complicated and elusive enigma.

Admittedly, as a new transplant to Georgia, I know very little about the industries that used to sustain towns and villages. But I recognize intuitively what has been lost over the past several decades of decline.

So here I am, writing about rural revival as one of the newest constituents of the small village of Bluffton, Georgia. This story is what inspired my work on the Village of Bluffton imagery and emblems.

As I thought about what the loyalty program was meant to communicate, I wanted to make a comparison between the pivotal role our animals play in the regeneration of the farm’s soil, and the essential role our customers play in the regeneration of the farm’s community. The animals on our farm are literally our lifeblood, and the same is true of our most loyal and devoted friends and customers. 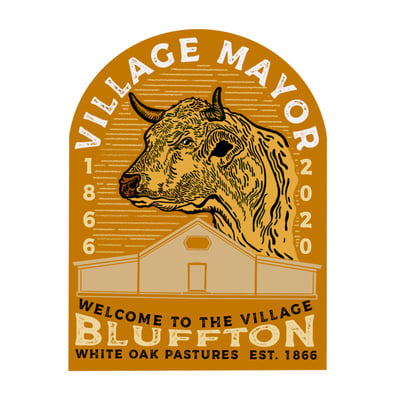 Our cattle are integral to our identity; they define our commitment to superior food production and regenerative agricultural practices.

Our sheep are playing an increasingly important role in the innovative work of regenerative energy, which in turn we hope will turn into deeper investments into the local economy. 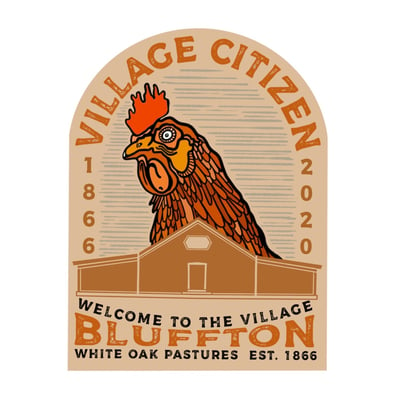 The chickens play a key role in restoring balance and health to the pastures we rely on to feed so many animals and people.

In modeling each tier of the rewards program after these important animals, I hope our loyal customers understand just how valuable they are to our farm. Our customers are a fundamental component of the regenerative cycle.

The final element in each emblem is a representation of our beloved White Oak Pastures General Store. Many of the long-time residents of Bluffton still remember when there were many stores, restaurants, and filling stations around the village. Their fond stories and memories of how life used to be have warmed my heart and filled me with a sense of loss at the same time. I feel homesick for a place I’ve never really seen.

But I believe grief is an important emotion, because at its core, it grows from an understanding that what is gone was incredibly valuable. To me, the General Store is a symbol of what many rural towns lost and what could be here again in the South.

As White Oak Pastures employees, we deeply believe in the power of good stewardship. Responsible stewardship has the ability to regenerate soil that was once considered depleted of diversity and unable to sustain life.

As an artist, my hope is that by helping you understand just how much those on this farm care for our land and animals, you’ll understand that we can give no higher honor than to compare you to them.

When you support our regenerative farm by buying our products, your money does for our community what our animals do for the land. Your support revives our community.