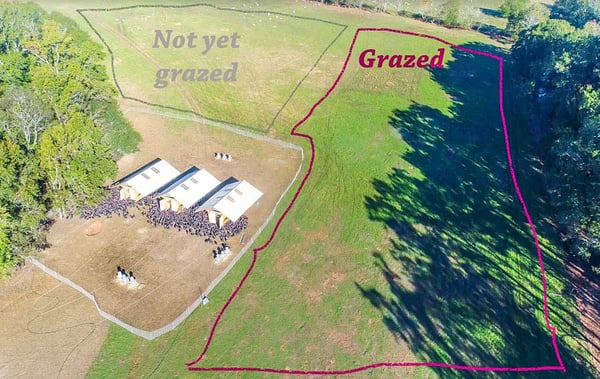 They applied copious quantities of chemical fertilizers and pesticides, they planted GMO seeds, and they tortured their soil with tremendous amounts of mechanical cultivation. After many years of farming in this way, the organic matter of their soil had fallen to less than one half of one percent.

Soil that has so little organic matter is a dead mineral medium. No matter how much precipitation falls, it is capable of absorbing only one half of one inch of a rain event. When their land received more than one half of inch of rainfall, it simply ran off. When this happened, it washed away the topsoil, polluting our rivers and oceans and flooding our cities.  Equally harmful, as a result of not absorbing the natural rainfall, the farm was highly dependent on pumped groundwater for irrigation. This is a Broken Water System.

The intense and repeated cultivation destroyed almost all of the microbial life in their soil. The natural function of these microbes is to take nitrogen and other greenhouse gasses from the air and make them available to plants. Additionally, when left to function properly, these microbes allow minerals from the soil to be absorbed by the plants. Thus, in the absence of these naturally occurring microscopic creatures, the farm became highly dependent on chemical fertilizers. This is a Broken Microbial and Broken Mineral System.

The crops that they produced were sold into the commodity market for commodity prices. This meant that the family was only required to meet the Minimum Standards that had been established by USDA. Any added value that farmers put into their product cannot be monetized in the commodity market. Thus, there is no financial incentive for them to put additional value [quality] into the corn and soybeans that they produced. This is a Broken Marketing System.

Buying manufactured crop inputs from multinational technology companies is incredibly expensive. It took almost all the revenue that their commodity crops brought in to pay for the fertilizers, pesticides, seeds, and other inputs that the farmers have to purchase every year. The farmer was dependent upon USDA Federal Crop Subsidies to generate a profit from his farming operation. Because of this, the local rural community became impoverished. This is a Broken Economic System.

Problems For Future Generations To Solve

Even though the farm's finances were tight, after many years the father had saved enough money to retire. He decided to give the land to his two sons.

The sons decide to split it into two farms, because one of the boys wanted to continue to farm in the industrialized, commoditized, and centralized system, as his father had done. The more enlightened son wanted to change the farm to a production system that was more beneficial for his land and his family and his community.

The Enlightened Brother sought to operate his farm in a manner that emulated nature. This is called Biomimicry.

Enlightened Brother wanted to end his reliance on the unnatural tools that Multinational Technology Companies market to farmers. These artificial crutches, developed through faulty reductionist science, are the only way that Nature will allow a monocultural production system to exist.

Enlightened Brother understood the need to bring animal impact onto the land into his production equation. He wanted to rebuild the microbial population that is the life of our soil. He was focused on Resilience.

Enlightened Brother had been born with the gift of seeing and understanding the Cycles of Nature - the Carbon Cycle, the Mineral Cycle, the Microbial Cycle, the Energy Cycle, the Water Cycle, and the many other Natural Systems. He realized that industrial farming practices had broken them.

The Enlightened Brother wanted to recreate the symbiosis that occurs when many different species of animals, plants, and microbes interact with and benefit each other. This symbiosis between living things yields the Bounty Of Nature. That abundance of the bounty of nature is the only real form of wealth that has ever existed on this earth.

[This is how the Earth evolved, over trillions of years. Please remember that Industrial, Centralized, Commoditized farming practices, and Highly Processed Foods, have only been with us for about 75 years.] 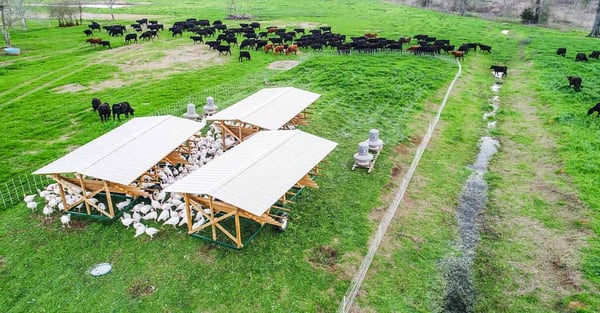 But… on the fourth year, Enlightened began to see a difference in his part of the farm. He saw insects, plants, and animals, fungi and birds, and other living things that he had never seen before. He became aware that his land was now Teeming With Life. He was fiercely proud.

He quit his minimum wage job working for Unenlightened. He began marketing the Bounty that was now being produced on his part of his father's farm, now alive again. He sold honey, eggs, vegetables, meat, poultry, fruit, nuts, and...

Enlightened found that people wanted to buy The Abundance that was coming from his living land. This caused him to strive to add as much quality as possible into his production. He was not hamstrung by merely meeting the Minimum Standards of the Commodity Market.  He had found the freedom to become prosperous.

Enlightened could not produce, process and market all of the Bounty that came from his farm alone. So he hired someone to help him. Then someone else, then someone else, until Enlightened had over 100 people helping him on his farm. This influx of productive people caused his village to become relevant and regain vibrance.

Enlightened had talented, enthusiastic, educated, passionate people from all over the country come to share in his farm's lifestyle. These young people renovated the impoverished and dying rural village that industrial centralized farming had caused to be irrelevant. There was a newly-found Rural Prosperity.

His farm was so unique that people came from all over the world to see it. So he built lodging accommodations, a restaurant called The Farmer's Table, and a General Store for them. He held training sessions to help people learn Regenerative Agriculture. He started an internship program.

Unenlightened Brother, and the guy that he hired to replace Enlightened, continued to industrially produce corn and soybeans for the centralized commodity market. But they managed to live [somewhat, to some extent, fairly, a little bit] happily ever after. Sort of.

This year save an extra 10% when you reserve a Thanksgiving Turkey by August 16. Reserve your bird now, and we will ship them in time for Thanksgiving, the week of 11/18/19.