It Has Gotten Worse In The Past 98 Years

The Hijacking of the American Food System ain't new, it just continues to get a helluva lot worse.

These words were spoken on the floor of the U.S. Senate by Wyoming Senator John B. Kendrick in 1921.

“[Agriculture] has been brought to such a high degree of concentration that it is dominated by few men. The big packers, so called, stand between hundreds of thousands of producers on one hand and millions of consumers on the other. They have their fingers on the pulse of both the producing and consuming markets and are in such a position of strategic advantage they have unrestrained power to manipulate both markets to their own advantage and to the disadvantage of over 99 percent of the people of the country. Such power is too great, Mr. President, to repose in the hands of any men.”

Twenty five years later, about 1946, the situation really began to get intense. World War II was the ULTIMATE GAME CHANGER for agriculture in the United States.

The technology WWII provided and the cultural shift it precipitated brought about revolutionary change. These were the most impactful changes that had occurred since the first human domesticated the first animal or placed the first seed in the ground. These radical changes revolutionized the way that the entire world produced food. 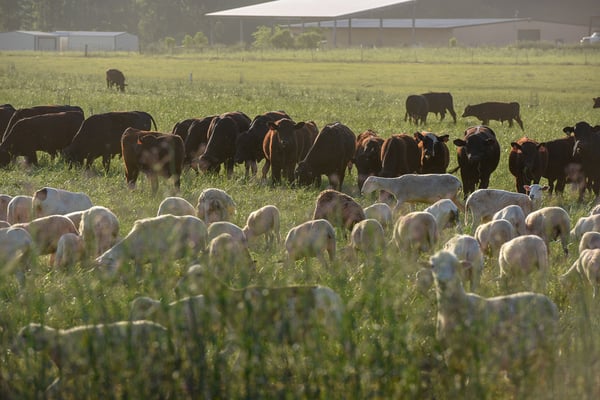 The sweeping changes an be categorized into 3 areas:

These changes were wildly successful in making our food cheap, abundant, and consistent.   Meaning, they caused our food to become Obscenely Cheap, Wastefully Abundant, and Boringly Consistent.

About 25 years ago at White Oak Pastures, we decided to exit this failing system.

The average American farmer gets less than 15 cents of the consumer food dollar. White Oak Pastures gets 100 cents of every food dollar you spend directly with us. We use those dollars to employ 165 people in Bluffton, Georgia, a previously impoverished village of 100 citizens. Our payroll is over $100,000 per week, paid out in one of the poorest counties, in one of the poorest states in our nation. We create wealth and prosperity in Bluffton, Georgia, not Wall Street or Silicon Valley.

Wendell Berry said something to the effect that consumers vote every day, with their food dollars, on how they want the world to be. Y'all get to decide. Go ahead and buy your food from whatever production system you feel supports what you believe in.

The industrial eater is, in fact, one who does not know that eating is an agricultural act, who no longer knows or imagines the connections between eating and the land, and who is therefore necessarily passive and uncritical — in short, a victim.

WENDELL BERRY: THE PLEASURES OF EATING