Meet Our Cowboys - Walt and Diquion 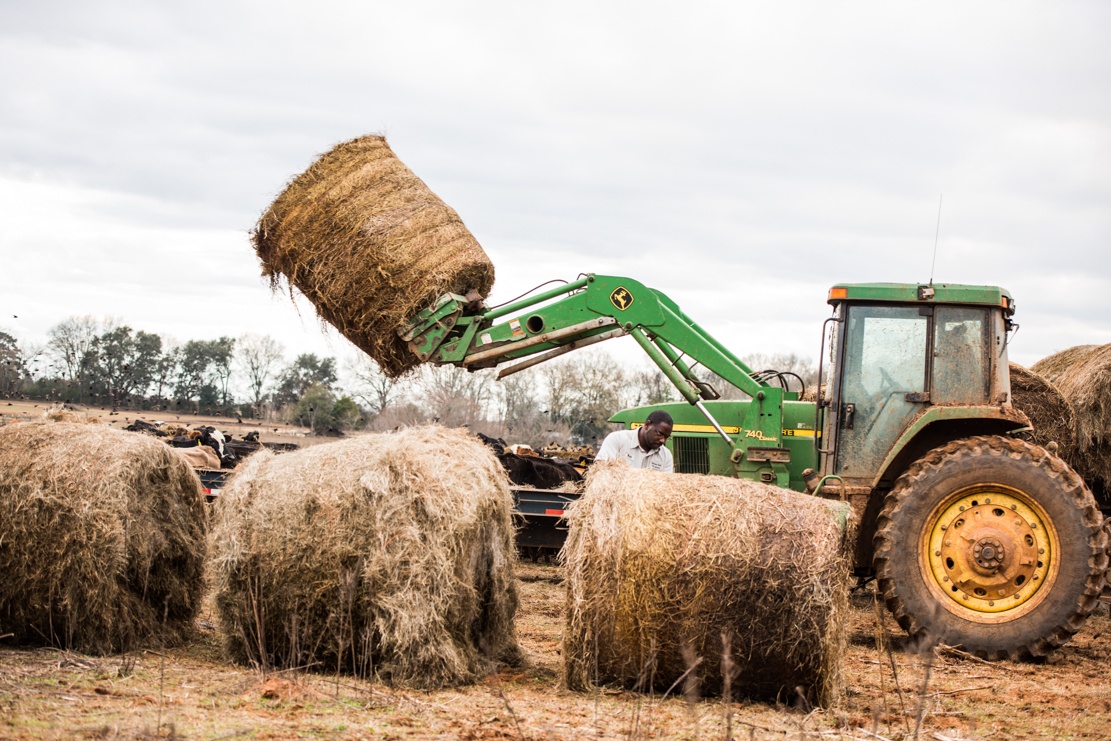 Trying to round up Walt Holmes and Diquion Jones for an interview was as difficult as their description of rounding up cattle. Actually, I think I had a harder time than they do when it comes to rounding up. No surprise there, as these two are the only two men herding our cattle with John Benoit, the Director of all the livestock at White Oak Pastures. 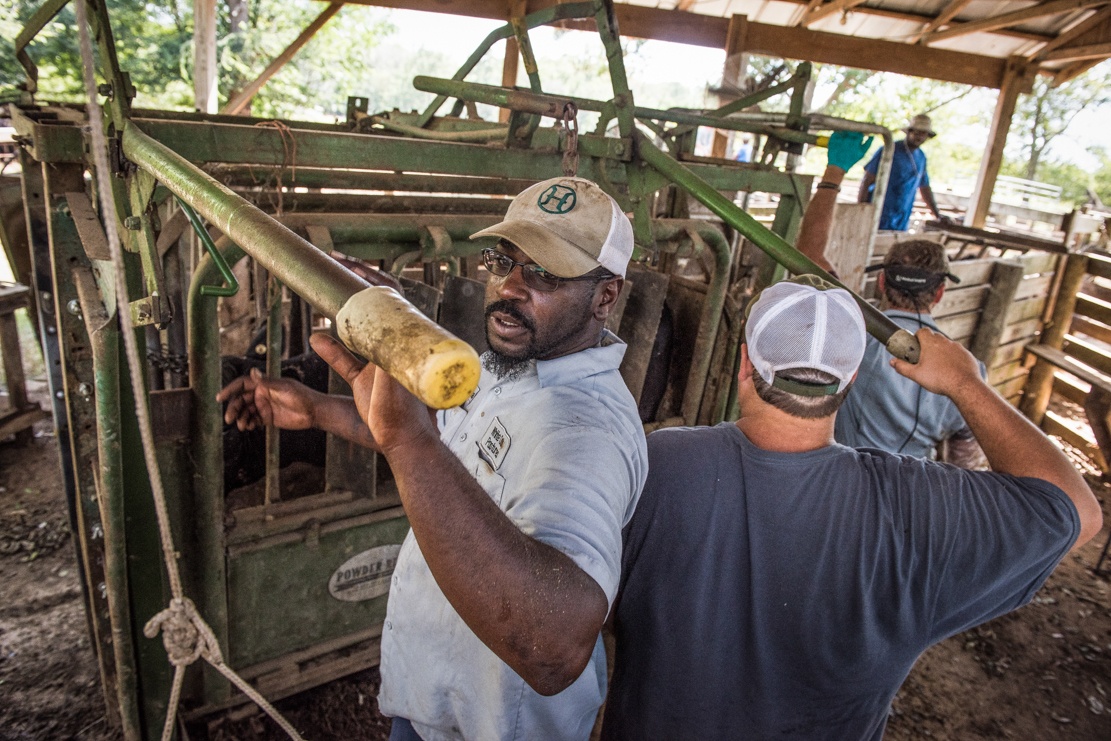 Walt has been working with Will Harris since 2004, and even though “Quan” recently joined the White Oak Pastures team this past year, it appears that he will be learning from the most experienced cattleman here, besides Will, of course. John is quick to give Walt and Quan recognition for their hard work and dedication. “Those two men literally work 7 days a week and don’t leave until the job is done. It is important for our customers to know how we feed our hay in a strategic manner and a certain way to bring new life to the land. This time of year our entire lives change and involve nothing but feeding thousands of cows worth millions of dollars. I help them when I don’t have other chores since their sole duty is hay. Walt has worked here the longest among all employees. I believe this year marks his 14th year on the farm and he has great stories about how everything has changed. He is full of knowledge. All the trees you see around the farm? He planted by hand, alone.” Since Quan joined White Oak Pastures within the last year, he has had the advantage of first-hand knowledge available to him during all those hours of hard work! He also has a few interesting tales to share as well! 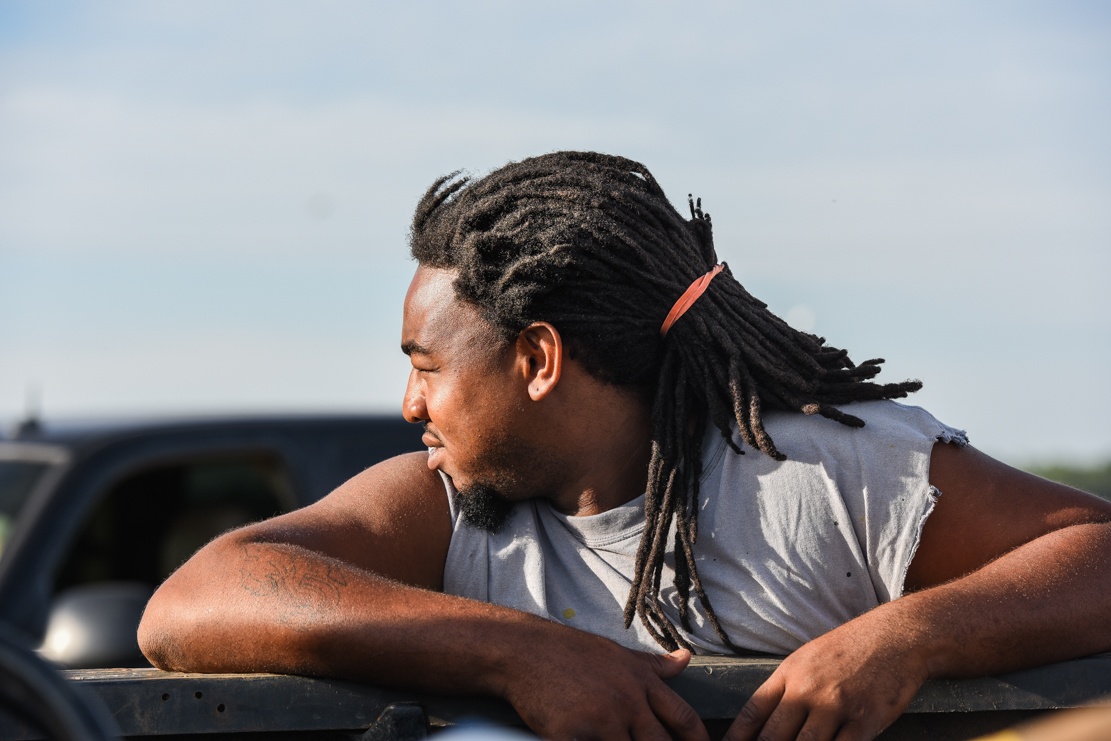 Even though Walt and Quan work seven days a week, eight or nine hours a day,  year-round, this time of year they have a day or two that may not be quite as long as the others. During the colder months, they drive twenty miles one way, every day to get hay. The big herd eats about 26 bales of hay a day. There are about fifteen different paddocks in which Walt and Quan rotate the cattle and they can rattle off the names of those pastures like nobody’s business! Along with those 15-20 paddocks comes an astonishing amount of fencing and fencing appears to be an ongoing project. Fencing is also something Walt has done, but now there is a fencing crew that focuses on fencing alone. Walt remembers a time when all the cattle were kept in one big field. They would rotate from one big field to the next, but with the rotational grazing model, they are moving smaller herds into fifteen or twenty small paddocks more frequently. The Department of Transportation built a tunnel under Highway 27 in order for the cattle to move safely from the pastures on one side of the busy highway to the other. Quan said he uses the tunnel for shelter when a storm comes up. 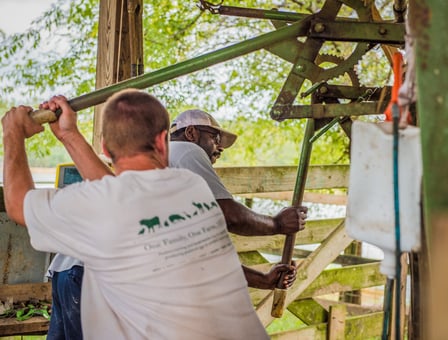 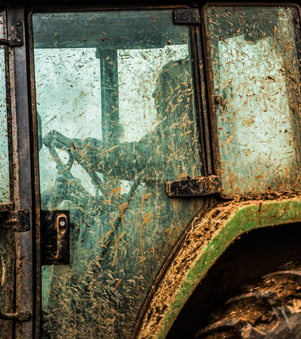 Walt and Quan have spent the better part of winter feeding the cattle haylage and minerals in what Walt describes as “cafeteria-style” eating. Approximately 20 different minerals are separated from each other in a feeding trailer that, in fact, is similar to a buffet. Walt and Quan keep records of the amounts of haylage and minerals the cows are fed. “Right now the cows are eating rye grass and clover that we planted in October. We will probably burn off the remainder of it and the Tiff 85 and Bahia, our warm season perennials, are growing now,” says Walt. Quan followed with “This is my favorite time of the year, when they are eating the grass.” Walt and Quan make sure the herd has water. When the herd is in a pasture without a well, they haul portable troughs of water to the field in which the cattle are grazing and run pipe to the trough. They also tag and weigh the cattle, then scan the information to monitor the weight gain of each cow. The weight is important because that determines the point at which a cow is slaughtered. 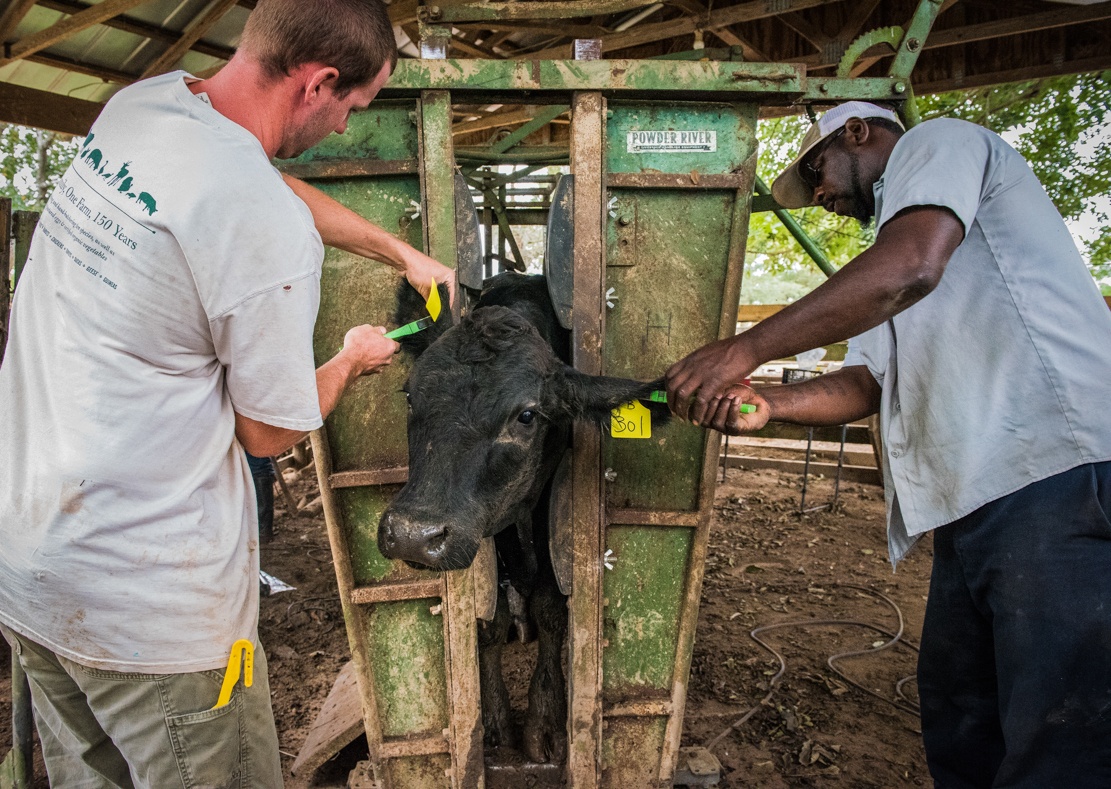 Just as the paddocks are separated into sections, our cattle are separated as well, depending on whether they are heifers, bulls, or offspring, and also according to different sizes. Walt and Quan can explain the reason for the division, the weaning process, the breeding cycles and the characteristics of the cattle. It often takes some ingenuity to get the cattle to walk where they want them to go, mainly through the tunnel or gates. That’s not something cattle really want to do, so none of these men have done this without repercussions. They have been chased, kicked, and knocked to the ground. “I was talking trash to get a girl cow through the gate (trying to get her to move) and she heard me. By the time I turned around, she hit me in the legs,” admits Quan. Walt said he let a bull out of the shoot  and it turned around when John was busy doing something else and the bull hit John in the back. He went on to say when John got up, before John could do anything, the bull hit him again.They watch as the alpha bull stakes his claim on the heifer, and the loser runs off. They watch as “one cow will help another one out.” They watch the cattle move towards them when they hear the motor of the their truck. They watch the cattle stand at the gate and wait because they want to go “where the grass is greener” since they have grazed that field. They watch as the cattle approach them while they are bringing them fresh hay with a tractor. These herdsmen watch, and learn, and know these cattle. What I don’t think they seem to realize, because they are so focused on the task at hand, is that what they do every day is appreciated by people all across the United States. We are proud of our two herdsmen, Walt and Quan, and we thank them for their nonstop dedication and hard work. 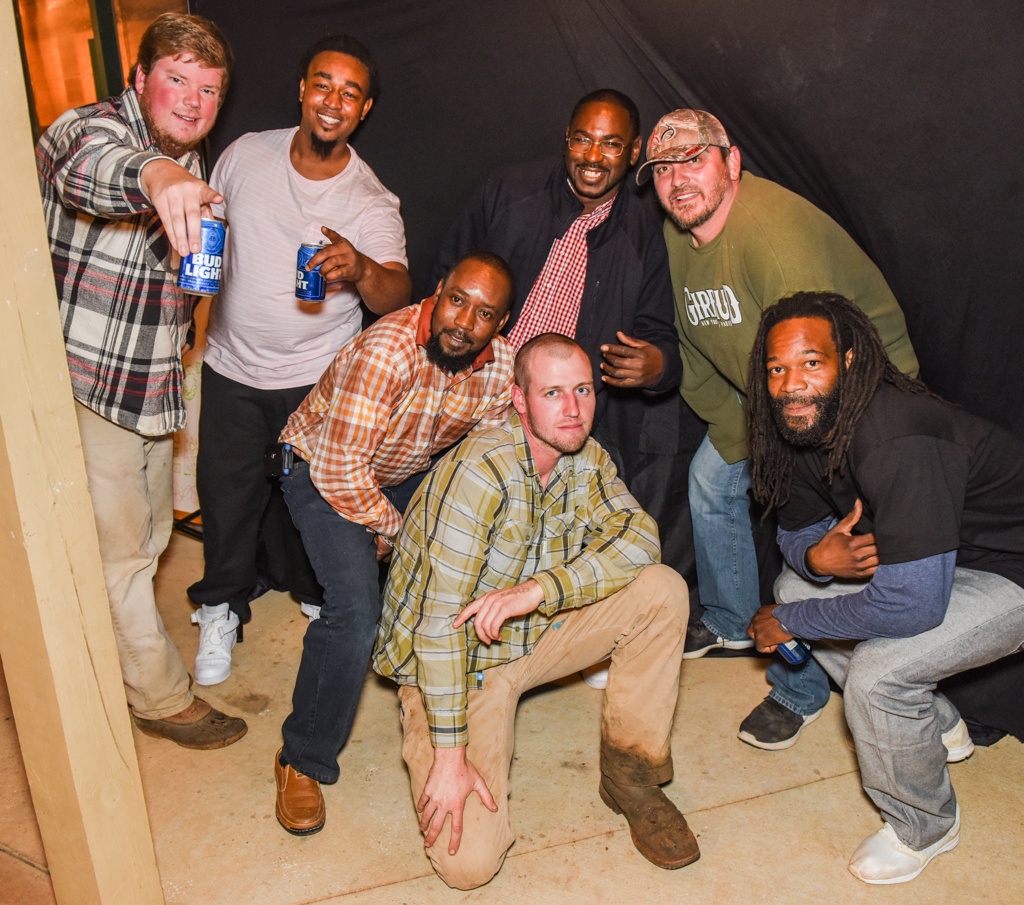